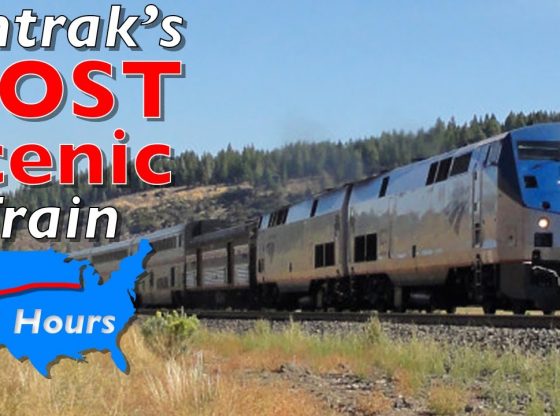 Amtrak’s California Zephyr will blow your mind. If you’re thinking of taking the ultimate Amtrak train journey, watch this!

With its unmatched scenery, Amtrak’s California Zephyr should top not just your train trip list, but your entire travel bucket list.

And, for the first time ever, I’ll even show you the shower on the California Zephyr.

You’ll see the sights, the food, and gain insight into what it’s like to travel on Amtrak’s most scenic train: The California Zephyr.

Amtrak’s California Zephyr train was named for the original train operated jointly by the Chicago, Burlington, and Quincy Railroad; the Denver and Rio Grande Western Railroad; and the Western Pacific Railroad. It was inaugurated March 19, 1949.

From its earliest days, the marketing and advertising for the California Zephyr train route has focused on the spectacular views along the way. And, in this video, you will see why!

This video started with five and a half hours of raw California Zephyr footage, distilled down to the best. That was a tough task because nearly every mile of the California Zephyr’s 2,438 mile journey was spectacular.

For more trip reports, please subscribe to my channel!
http://www.JebBrooksFlies.com

And here’s a link to the video we made about Amtrak’s Southwest Chief:

Here’s a video I made comparing Amtrak’s Acela to a plane:

And, while we’re at it, here’s a playlist of all of the train videos on my channel:

Want a t-shirt like mine? Here’s a link [not sponsored]

And don’t forget to take a look at my travel blog:
https://greenergrass.com/