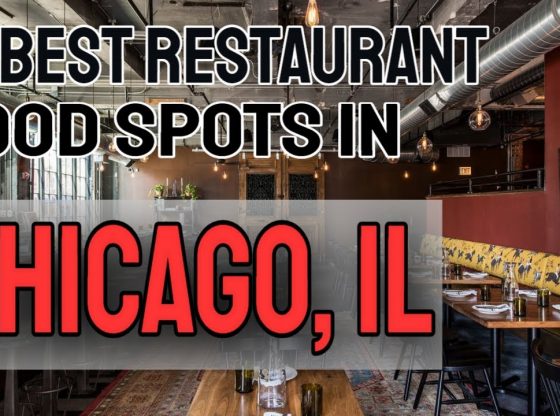 Check Out Our Other Chicago Video:

For sure one of the things that will bring you to Chicago is their food scene. Being a large metropolis full of history and diversity their amazing cuisine selections will surely have people coming back over and over.

Welcome to ThingsToDo CHannel, we publish new content everyday so be sure to subscribe to our channel and ring the bell to get notified about our latest video.

Now let’s explore the top 10 places to satisfy the foodie in you within the bright lights of Chicago.

The city of Chicago is one of the cities in the United States with a large Mexican population, so it is no surprise that Mexican cuisine is already attached with Chicago. One should try the cemita, a typical sandwich made up of avocado, chipotle sauce, Oaxacan cheese, and meat inside a homemade sesame seed roll.

There are so many things to do in Chicago, it’s enticing to forgo a sit-down meal and opt for the easy accessibility of street food. Lo and behold the mighty empanadas at one of Chicago’s best food trucks: 5411 Empanadas.

Make your Chicago visit a little sweeter by heading to The Fudge Pot, an iconic shop existing for over 50 years. Chocolate lovers can’t go wrong with any of their offerings, but particularly famous for their Butter Toffee.
Jibarito at Papa’s Cache Sabroso.

Puerto Ricans also have a contribution to the city and it is the Jiabarito. Though it may look like a regular sandwich, there is one thing that sets it apart: There’s no bread! Instead, crispy plantains hold together layers of meat, cheese, lettuce, and tomato.

The Kuma burger at the controversial Kuma’s Corner.

A restaurant that blasts heavy metal music, refuses to carry Budweiser, and stirs controversy with the Catholic Church, and still continues to be adored. Surely you can only find that in Chicago. Kuma’s Corner has become a top spot in every food lover’s pilgrimage.

You’ve probably seen them everywhere and It’s been admired by the likes of Rick Bayless and the late, great Anthony Bourdain. Now is your chance to try the Chicago-style hot dog, the dish that truly captures the hearts of locals and visitors alike. At Portillo’s, you get the quintessential example of this Chicago signature dish: an all-beef frankfurter tucked into a steamed poppy seed bun, topped with relish, celery salt, chopped onions, sliced tomatoes, sport peppers, and a pickle.

When the doughnut craze hit the city, there was one ring to rule them all: Do-Rite Donut’s Buttermilk Old Fashioned Donut. Crunchy on the outside, pillowy on the inside, and coated in a vanilla-bean glaze, this doughnut reaches perfection when dunked in coffee. It’s a classic take on a breakfast staple that shines precisely because of its simplicity.

An iconic restaurant and even referenced in music from legendary rappers like Lupe Fiasco, Common, and Kanye West. Find out why it’s been sung about and head to Harold’s for the standard fried chicken dinner, which includes cooked-to-order chicken with a side of fries, coleslaw, and two slices of white bread to scoop up every drop of their tangy hot sauce.

There are many arguments about who has the best Chicago deep-dish pizza, but a debate over who makes the best Chicago Italian beef probably doesn’t exist. The most Chicago of all Chicago sandwiches, Al’s Italian Beef’s specialty is a flavor bomb: slices of roasted sirloin cooked in a seasoned broth are stuffed inside an Italian-style roll thick enough to soak up the meat’s juices. You can customize your experience so you can get your sandwich just how you like it. Diners can order it “dry” (only a touch of gravy), “wet” (extra gravy), or “dipped” (dripping wet). You can also top it off with a variety of cheeses, sweet pepper or a hot giardiniera for an extra kick.

This is probably the reason you came to the city. To finally taste the thick wedge of melted cheese, personalized toppings, and zesty tomato sauce. There are many fierce competitors claiming that they have the best Chicago deep-dish pizza, but Lou Malnati’s is the crown jewel. Its unique butter crust sets it apart and every single inch of the aluminum pan is covered in a lip-smacking layer of high-quality ingredients. Pro-tip: One can join a food tour, so you can skip the lines and have a VIP experience.