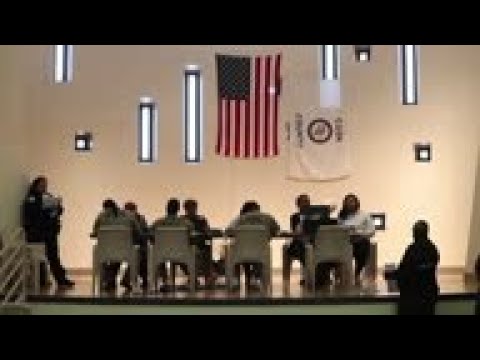 (16 Mar 2020) Inside Chicago’s Cook County Jail, Sirjerathan Wilson, 28, has been locked up on a gun charge for seven months. Earlier this month, while still awaiting trial in jail, he voted for the first time in his life.
“Where I came from, I never really thought the higher up really cared about the minority and where we came from. And then nothing really changed from my whole life being in Englewood,” Wilson said of his south side Chicago neighborhood.
But after a fellow detainee began explaining the process of voting and how his opinion mattered, Wilson decided to cast his ballot right there in jail.
Wilson is among well over 1,200 detainees at Cook County Jail in Chicago doing something that’s never been done in Illinois and, except for one small pilot project in California, may never have done in any jail in the United States. They are casting their ballots in a polling place set up right inside the jail.
The jail polling place is the result of a new law passed in Illinois that requires the 20,000 pretrial detainees locked up in jails across the state be given the opportunity to vote. That means that absentee ballots must be distributed in every jail in the state. But the law also requires that any county with more than 3 million residents set up voting machines in the jail and only Cook County has that many residents.
All of which is more than fine with Sheriff Tom Dart, whose office runs the jail that now has about 5,500 inmates _ 95 percent of whom are awaiting trial. To Dart, who has gained a national reputation for innovation on everything from an inmate-operated in-jail pizza kitchen to an inmate-run garden that sells produce to local businesses to a program in which inmates help demolish vacant homes, voting is part of a larger effort to create productive citizens.
In the first of two weekends of voting at the jail, 1,200 detainees cast ballots. The jail did not have the tally for the second weekend, but the percentage of detainees to vote will certainly be higher than the 28.5 percent of voters that the Pew Research Center determined went to the polls during the 2016 presidential primaries.