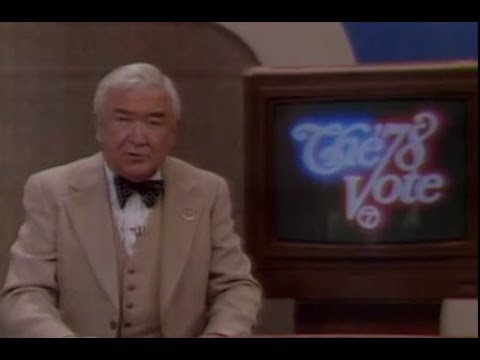 In rememberance of midterm elections past, here’s the ending moments of ABC News’ coverage, as aired over WLS Channel 7, of The ’78 Vote (helmed by Frank Reynolds – a Chicago connection, as he had been with Channel 7 in the early 1960’s during its days as WBKB), followed by the start of Eyewitness News local election coverage anchored by Fahey Flynn and Joel Daly. This was another wonderful EOTF, or “end of tape find” that was mostly recorded over but this segment survived at the end of a 3/4″ Umatic tape.

(TECHNICAL NOTE: The supers of election results on the national coverage were set in 28 and 18 point CBS News 36 as from Vidifont, an early CG system.)

With that, Frank signals the end of network coverage for 30 minutes to allow for local news.

Fahey previews news items including a GM recall and election results for “Chicago, Cook County, Illinois and the nation”

Commercial: The First National Bank of Chicago (am I nuts or does the guy in this look exactly like Norman Mark?)

Fahey and Joel open program, with Fahey announcing winners as James Thompson (as Governor), Ed Scott (as Congressman), Alan Dixon (as Secretary of State) and Richard Elrod (as Cook County Sheriff), Charles Percy pulling ahead in the Senate race, and IL-10 up in the air between John Porter and Abner Mikva (the latter ended up winning)

Joel mentions James Thompson’s win as Governor, noting it was the biggest victory since Otto Kerner’s 1966 win over Charles Percy; Thompson speaks at his HQ where John Drury reported on the big night (tape cuts out in middle of Thompson’s victory speech)

About The Museum of Classic Chicago Television:

The Museum of Classic Chicago Television’s primary mission is the preservation and display of off-air, early home videotape recordings (70s and early 80s, primarily) recorded off of any and all Chicago TV channels; footage which would likely be lost if not sought out and preserved digitally. Even though (mostly) short clips are displayed here, we preserve the entire broadcasts in our archives – the complete programs with breaks (or however much is present on the tape), for historical purposes. For information on how to help in our mission, to donate or lend tapes to be converted to DVD, and to view more of the 4,700+ (and counting) video clips available for viewing in our online archive, please visit us at:
http://www.fuzzymemories.tv/index.php?contentload=donate