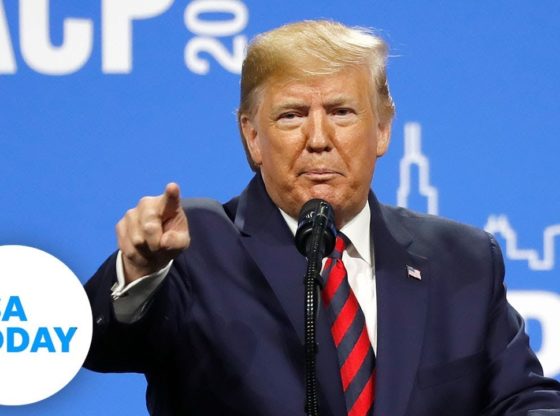 President Donald Trump speaks at the largest annual gathering of law enforcement leaders in the world, the International Association of Chiefs of Police Conference in Chicago.
RELATED: Trump on Islamic State https://bit.ly/32Xm83m

Amid an impeachment inquiry in Washington and an ongoing strike by more than 32,000 teachers and school staff, Donald Trump is expected to make his first presidential visit to Chicago on Monday, a city that he often ridicules for how its leaders handle gun violence.

Trump is scheduled to attend a fundraiser Monday morning hosted by Todd Ricketts, Cubs co-owner and Republican National Committee Finance chairman. Later, he will speak at the largest annual gathering of law enforcement leaders in the world, the International Association of Chiefs of Police Conference.

Police Superintendent Eddie Johnson, this year’s conference host, said he plans to boycott the president’s remarks, a move that pushed Chicago’s Fraternal Order of Police board to issue a vote of no confidence in Johnson.

“As police officers, our job is to be the voice for the voiceless and ambassadors to the communities that we serve,” Johnson said in response to the vote. “I can’t in good conscience stand by while racial insults and hatred are cast from the oval office or Chicago is held hostage because of our views on new Americans.”