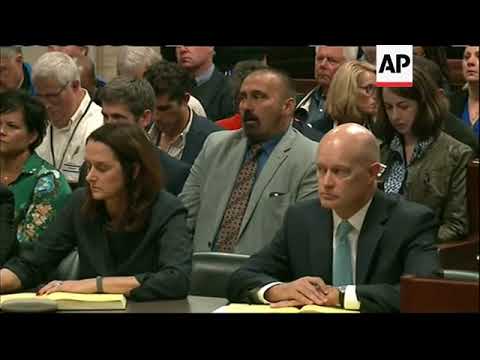 POOL – AP CLIENTS ONLY
Chicago, Illinois – 5 October 2018
1. Various, jury foreperson reading the verdict as Officer Jason Van Dyke listens
STORYLINE:
A jury on Friday convicted white Chicago police Officer Jason Van Dyke of second-degree murder in the 2014 shooting of black teenager Laquan McDonald.
Van Dyke was charged with first degree-murder in the October 2014 killing, a charge that requires a finding that the shooting was unnecessary and unreasonable.
The judge told jurors the second-degree charge was also available, requiring them to find Van Dyke believed his life was in danger but that the belief was unreasonable.
Jurors also convicted him of 16 counts of aggravated battery, but acquitted him of official misconduct. It’s the first time in half a century that a Chicago police officer has been convicted of murder for an on-duty death
Second-degree murder usually carries a sentence of less than 20 years.
===========================================================
Clients are reminded:
(i) to check the terms of their licence agreements for use of content outside news programming and that further advice and assistance can be obtained from the AP Archive on: Tel +44 (0) 20 7482 7482 Email: [email protected]
(ii) they should check with the applicable collecting society in their Territory regarding the clearance of any sound recording or performance included within the AP Television News service
(iii) they have editorial responsibility for the use of all and any content included within the AP Television News service and for libel, privacy, compliance and third party rights applicable to their Territory.