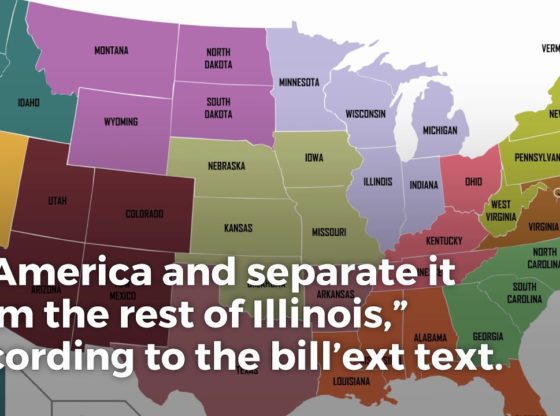 Illinois Conservatives Launch Effort To Boot Liberal Chicago Out of State Several Illinois Republicans are cosponsoring legislation that would start the process of separating Chicago from Illinois, claiming the Windy City’s huge influence means rural areas of the state are not sufficiently represented. Many people living in rural downstate Illinois don’t feel represented by their government because of Chicago’s massive influence over the state’s politics. House Resolution 101, introduced in February, “urge[s] the United States Congress to take action to declare the City of Chicago the 51st state of the United States of America and separate it from the rest of Illinois,” according to the bill’ext text. Illinois Republican state Rep. Brad Halbrook, who cosponsored the legislation, reasoned that there is a stark ideological divide between Chicago and the rest of the state. “Our traditional family values seem to be under attack at every angle,” Halbrook told The State Journal-Register last month. “We are trying to drive the discussion to get people at the table to say these are not our values down here.” Illinois Republican state Rep. C.D. Davidsmeyer, who also cosponsored the resolution, doesn’t actually want to separate Chicago from the rest of Illinois. “It’s more of a frustration of the policies than the true belief that Chicago and Illinois would be better off as separate states,” he told The Journal-Register.”I don’t believe that Chicago and the state of Illinois should be separated. Our relationship is mutually beneficial.” But Halbrook suggested to Fox News that Chicago is responsible for “the piling on of debt. “The goal is to form a new Illinois,” he said. https://www.westernjournal.com/ct/illinois-conservatives-launch-effort-boot-liberal-chicago-state/