Celebrations as Chicago officer convicted in shooting of black teenager 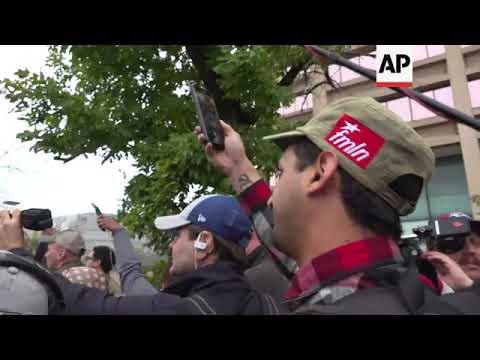 (5 Oct 2018) Cheers erupted outside the courthouse after a jury on Friday convicted white Chicago police Officer Jason Van Dyke of second-degree murder in the 2014 shooting of black teenager Laquan McDonald.
“Justice for Laquan!” the people cheered as news reporters and photographers looked on.
Van Dyke was charged with first degree-murder in the October 2014 killing, a charge that requires a finding that the shooting was unnecessary and unreasonable.
The judge told jurors the second-degree charge was also available, requiring them to find Van Dyke believed his life was in danger but that the belief was unreasonable.
Jurors also convicted him of aggravated battery, but acquitted him of official misconduct.
It’s the first time in half a century that a Chicago police officer has been convicted of murder for an on-duty death.
McDonald was carrying a knife when Van Dyke fired 16 shots into the 17-year-old as he walked away from police.
Second-degree murder usually carries a sentence of less than 20 years
Van Dyke was the first Chicago police officer to be charged with murder for an on-duty shooting in more than 50 years. That case, which also involved an officer shooting someone with a knife, ended in conviction in 1970.
The 12-person jury included just one African-American member, although blacks make up one-third of Chicago’s population. The jury also had seven whites, three Hispanics and one Asian-American.