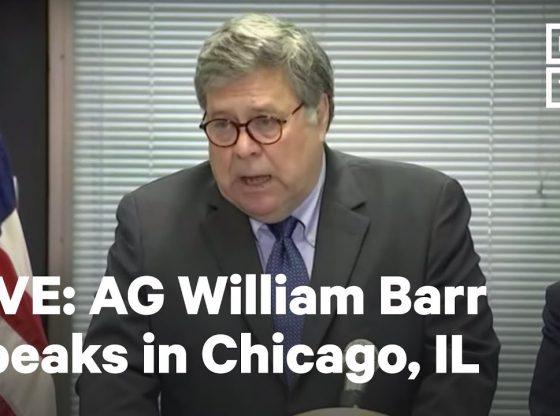 AG BARR PRAISES WORK OF FEDERAL TROOPS IN U.S. CITIES: Attorney General William Barr is in Chicago, IL delivering remarks on Operation Legend, which is Pres. Trump’s initiative to send federal agents into cities across the country to combat violence and crime. The federal effort quickly drew criticism following the violence in Portland, OR, where the agents acted to escalate violence, assaulted protesters, fired projectiles at them, and forcibly dragged many into unmarked vehicles without identifying themselves. Though Mayor Lori Lightfoot was opposed to Trump getting involved in Chicago, agents from the FBI, ATF, and the Dept. of Homeland Security began arriving in July, and the effort has spread to seven additional cities across the country. The Justice Department has said that, nationally, the initiative has resulted in 500 people being federally charged, and about 150 of those have been charged with murder. Barr’s visit to Chicago comes just one week after Trump signed a memo that threatens to block federal funding for cities that the White House deems to be ‘anarchist jurisdictions.’ The memo singled out major U.S. cities all run by Democrats that Trump claims are allowing ‘anarchy, violence, and destruction.’
» Subscribe to NowThis: http://go.nowth.is/News_Subscribe
» Sign up for our newsletter KnowThis to get the biggest stories of the day delivered straight to your inbox: https://go.nowth.is/KnowThis

NowThis is your premier news outlet providing you with all the videos you need to stay up to date on all the latest in trending news. From entertainment to politics, to viral videos and breaking news stories, we’re delivering all you need to know straight to your social feeds. We live where you live.