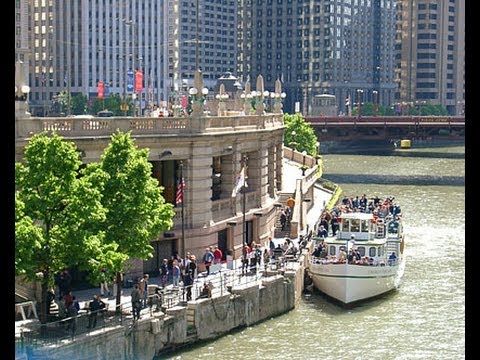 One of the best ways to appreciate the beauty of the city as well as learn about it is from the water. Such excursions operate from May to early November, but it is best to check with the individual sightseeing company for schedules and costs. Chicago Line Cruises runs both history and architectural boat trips. Boats departing from Navy Pier run the gamut from schooners to yachts and those that include meals and cocktails. Windy I or Windy II set sail around Lake Michigan. Or you can paddle a kayak down the Chicago River with Wateriders and explore history, architecture or gangster history.

There are plenty of road-based options for touring the city. Gray Line Tours runs a variety of city excursions including ‘North’ and ‘South’ side city tours, which cover all the major sights in those parts of the city. Buses leave from 55 East Monroe Street. The Chicago Double Decker Co., based at the Willis Tower, offers double-decker service, using London-style double-decker buses to tour 21km (13 miles) of Chicago’s main sights. A hop-on hop-off service (explore a site and catch another bus to resume the tour) stops at a number of points, including Navy Pier, Willis Tower, the Art Institute and Field Museum.

Considered a ‘themed visit’ rather than a tour, Chicago Greeters will escort small groups (up to six) to attractions, neighbourhoods, explore insider’s favourite haunts, visit specific points of interest, or even take them shopping. Greeters are residents who know and love the city. Advance reservations are necessary for this free service of the Chicago Office of Tourism.

The Untouchables Gangster Tour takes a step back to the days of prohibition. It traces the paths of some of the city’s most infamous 1920s and 1930s residents, like Al Capone and John Dillinger. Wisecracking guides relate gangster lore on the way to famous hoodlum haunts like Little Italy and the St Valentine’s Massacre. All tours depart from 600 North Clark Street, and reservations are necessary.

Chicago Hauntings visits paranormal and supernatural locations around the city. A two-hour 45-minute bus ride explores such haunts as the Biograph Theater, Graceland Cemetery, and the site of the Fort Dearborn massacre. Reservations are necessary.

Chicago is known for its architecture and there is no better way to learn about the city’s structural designs than by taking one of the many tours that the Chicago Architectural Foundation offers. Tours, which are on foot, by bus and on the water, include historic and modern skyscrapers as well as Frank Lloyd Wright homes. Except for the water tours, most begin at 224 South Michigan Avenue.

The 202-hectare (500-acre) estate of legendary Chicago Tribune editor and publisher from 1925-1955, Colonel Robert R McCormick, is one of the far west suburbs’ key attractions. Originally built in 1899 by McCormick’s grandfather and founder of the Chicago Tribune, Joseph Medill, the estate has 16 hectares (40 acres) of stately gardens and two museums. McCormick served in the US Army’s First Division and The First Division Museum is devoted to the history of this infantry division from 1917 to Desert Storm. On the lawn are tanks from World War II, the Korean War, and the Vietnam War. The Robert R McCormick Museum is the colonel’s 35-room, plantation-style mansion complete with original furniture, antiques and artwork.