Quincy to Chicago Ride on Amtrak’s Illinois Zephyr (Round Trip) 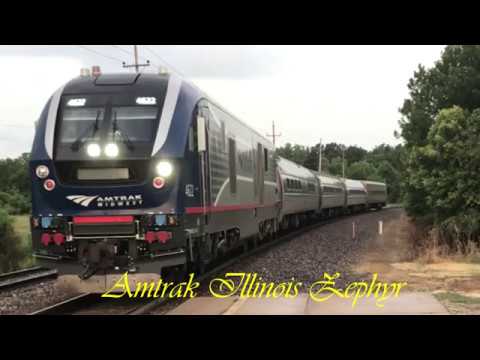 It’s just after dawn in Quincy Illinois as Amtrak’s Illinois Zephyr starts its run to Chicago. As it approaches the station, the train has spent the night at the West Quincy BNSF yard after coming into town the previous night. Today we will ride all the way to Chicago on Tracks owned by BNSF traveling 258 miles and a time of four and a half hours. Leading today’s train is Siemens SC-44 Charger IDTX 4622 built in 2016 and went into service in August of 2017. The consist also includes three Amfleet and one Horizon Fleet passenger cars. With the best conductor and the most awesome engineer ever going to Chicago was driving 380 this morning. The Illinois Zephyr began on November 14th of 1971. It is a state funded train of the Illinois Department of Transportation. The train uses half of a route once used by the old CB&Q American Royal Zephyr, and the Kansas City Zephyr. The trains call number were once 347 (eastbound) and 348 (westbound) before Amtrak’s Carl Sandburg went into service in 2006 and was renumbered 380 and 383. The train service was requested by Quincy College (Quincy University), Western Illinois university and many residents along the route it now serves after CB&Q quit the Chicago and Kansas City trains. The Illinois Zephyr’s ridership is very well and popular. It is a great way to travel between Chicago and Quincy. Here is what it is like to travel on Illinois Zephyr minus a few issues along the way and aggravating ringtones and sounds from phones is pretty much the only disadvantage, otherwise.
Enjoy, thanks for watching!

Note: Please do not try the correct any caption for all information is accurate and cannot be edited. This video is free entertainment. Please feel free to comment, FYI the long distance train at 1:09:23 is Empire Builder #7 and is a long distance train, and the passing Amtrak train that was missed at 1:12:53 was Southwest Chief #4