I drove through the WORST parts of East St. Louis, Illinois. This is what I saw.

Home /Illinois/I drove through the WORST parts of East St. Louis, Illinois. This is what I saw. 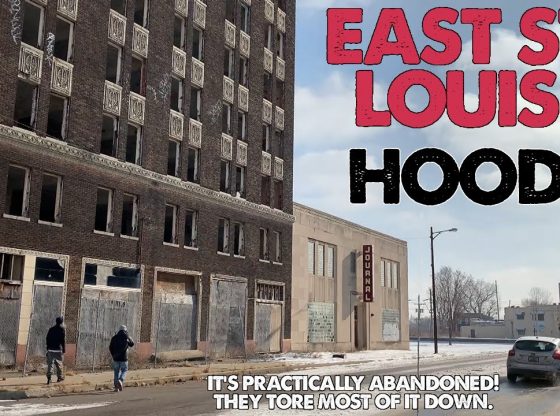 Wow! This place is completely abandoned and an empty wasteland now!

In our last video, we visited St Louis, Missouri, and right now, we’re going to cross over the Mississippi River and head into Illinois. We’ll take the first exit, Barack Obama Highway, and head deep into East St. Louis, one of the most notoriously rundown and dangerous communities in America.

The region has just received several inches of snowfall two days prior, but as you can see, today, the skies are bright. The air was crisp, and the snowfall made the area appear unusually charming, like makeup covering a bruise.

Like other rust belt cities in the midwest, East St Louis was once a bustling community, and at its peak, was home to 82,000 people. However, the economic decline has hit this city hard, and the population now numbers around 27,000, shrinking by more than two thirds.

It was once Illinois’ 4th largest city, and was an All American city as late as 1959. But that was a long time ago – 60 years in fact.

The problem here really began in the 1970s when the middle class moved out of the area, and the resulting failed tax base meant basic city services, including police and fire departments, had trouble operating.

Because of depopulation, East St Louis today has many abandoned properties and extensive urban blight. All over town are sections of “urban prairie” where vacant buildings were demolished and whole blocks have become overgrown with vegetation. We saw the same thing in Detroit.

We drove by one such home being razed to the ground. You can see it here.

Much of the land outside of the city remains undeveloped, bypassed by developers who chose more affluent suburban areas. That area is now farming. What’s left in city limits proper are widely scattered “inner city” neighborhoods, truck stops, adult venues, liquor stores and other blighted sections of town.

35% of the city lives below the poverty line, where family incomes average under ,000 a year.

Crime wise, East St Louis is notorious among the midwest. The per capita homicide rate here is about 18 times the national average, and East St Louis has the highest murder rate of any city in the United States. Kids who grow up here are told to take cover in the bathtub when they hear gunfire. People don’t answer their doors after dark.

However, it was early in the day, and much of the trouble makers here were still indoors, perhaps daunted by the icy roads and cold weather.

We’ll drive through some of the worst sections of East St. Louis now.
East St. Louis wasn’t as bad as we thought it would be. Perhaps some of the blight was masked by the recent snowfall, and it appears as if more and more blighted neighborhoods have been demolished, possibly never to be rebuilt. In terms of dangerous members of the community, it would have been a different case had we driven through these areas at night.

As it stands, we’ve now reached the far northern limits of town, which is where urban blight meets farmland.

This channel talks about America, different states, education, travel, geography and what it’s like to live in different places in America.

Mappy: [email protected] He’ll do his best to answer your questions and fan mail.

More info on I drove through the WORST parts of East St. Louis, Illinois. This is what I saw.

I drove through the WORST parts of East St. Louis, Illinois. This is what I saw. - BingNews
Search results