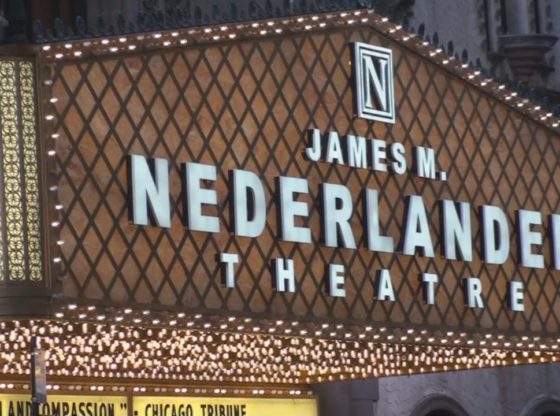 Find out more about the Iroquois fire here. https://youtu.be/qNFIxaqQk_Q

Walking down Randolph St. heading from blues fest in Millennium park to the train station I was surprised to see that The Oriental Theater was now named The Nederlander Theater. The theater was designed by the firm of Rapp & Rapp who also designed the Chicago Theater located just around the corner from the Nederlander. It opened as a movie theater / vaudville house in 1926 and closed it’s doors and closed in 1981. In 1996 it reopened as a theater as Chicago’s loop remade itself into a live theater district. I remember seeing the sing along Wizard Of Oz there.

In November 2018 the announcement was made that the theatre would be renamed to honor James M. Nederlander, founder of Broadway In Chicago, Broadway theatre owner and producer, and champion of Chicago’s Downtown Theatre District, who died in 2016. The new signage was unvield on February 8, 2019. In 1978 the theater was listed on the National Register of Historic Places. This location originally was the site of another famous theater The Iroquois which burned down in 1903 killing more than 600 people. Twice as many as the Great Chicago Fire.

The music is “Turn” by The Tower Of Light and it’s from the YouTube music library.