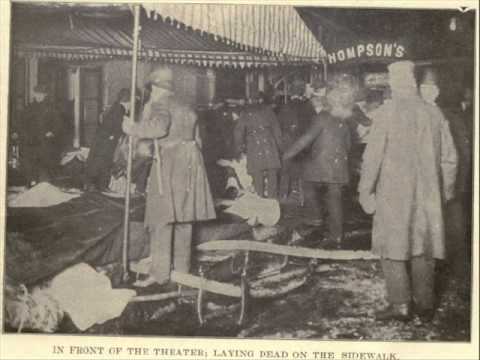 The Iroquois Theatre (Theater) Fire occurred on December 30, 1903, in Chicago, Illinois. It is the deadliest theater fire and the deadliest single-building fire in United States history. A total of 602 people died as a result of the fire.

The theatre had three audience levels. The main floor (known as the “orchestra” or “parquet”) was on the same level as the Foyer or Grand Stair Hall. The second level (the “dress circle”) and the third level (the “gallery”) were accessed through broad stairways that led off the foyer. The backstage areas were unusually large, with dressing rooms on five levels, an uncommonly large fly gallery (where scenery was hung), and even an elevator available to transport actors down to the stage level.

The Iroquois was Chicago’s newest and most polished theater, built by architect Benjamin Marshall, who had studied many fires over the years and had tried to make this particular building as safe as possible. The Iroquois was designed in the image of a famous Paris opera house, and the four-story structure contained elaborates stained glass windows and polished wood. The lobby of the Iroquois had a sixty-foot high ceiling and marble walls, and Marshall had put in as many as twenty-five exits that supposedly would allow a capacity crowd to escape any problems in less than five minutes. A curtain made of asbestos was supposed to be present, one that could be lowered from above the stage to protect the audience in case of a fire that started there.

But common sense did not prevail when it came to the seats in the Iroquois Theater, as they were made of wood and stuffed with straw, making them extremely flammable. The fire equipment that was supposed to be installed never did make it into the Iroquois, which had no fire alarms at all. In the haste to get the theater open, many safety precautions were simply overlooked, and the combination would prove disastrous. December 30th was a very cold day in the Windy City, and the Iroquois was packed for a showing of the popular comedy “Mr. Bluebeard”. Since it was the Christmas break, there were over 2,000 people in attendance, many of them children, with another 400 actors and stagehands behind the scenes. One of those actors was the famous vaudeville performer Eddie Foy.

At around twenty after three during the afternoon one of the many suspended curtains that were used for scenery, painted with volatile oil paints, caught fire from one of the hot stage lights and the flames began to spread upwards. The audience thought that this was somehow part of the show for a while, and Foy came flying out of his make-up room and urged the crowd to be calm, reminding them time and again that the Iroquois was fireproof. The orchestra even began playing, and the crowd seemed to feel there was no threat, until a set that was ablaze came thundering down onto the stage. At this point Foy called for the asbestos curtain to be lowered to protect the audience until the fire could be controlled, but the devise failed to work properly, leaving a gap of some twenty feet between the bottom of the curtain and the stage for the fire to come through.

The actors and stagehands then panicked and headed for the rear exits as the audience finally figured out, too late, that the fire was unstoppable. As the flames spread, those backstage opened the rear doors to escape, and the air that rushed in turned the fire into an inferno. The delirious mass of people headed for any door that they could find, trampling one another and shoving and pushing in frightened hysteria. But the exit doors opened inward, and the crush of bodies against the people trying to open them did not allow them to do so. Also, many of the side doors were locked. The Iroquois was plunged into darkness as the lights went out, and the fire, fueled by the air coming in from the rear doors, exploded throughout the main auditorium.

When the fire company arrived, everything appeared normal, as there was no smoke coming out of the Iroquois Theater at first. But when they went into the building, they could not open the doors because of the bodies that were stacked against them. The death toll in the upper balconies was tremendous, as the fire escape supposedly leading down to the street a hundred feet below was found to be non-existent, leaving some to jump or fall to their death from the great height. As many as 150 people met their fate in this manner.