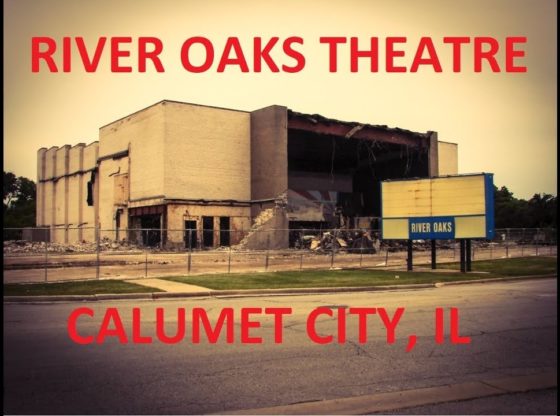 The original one screen River Oaks Dimension 150 Theatre was opened May 30, 1969 by ABC Great States Theaters. It had 1,600 rocking chair seats, a large curved screen, auditorium lights on the sides of theater that were dimly lit during intermission, and a giant curtain that opened from both sides at the middle. This theater was classy to say the least. It’s premiere attraction was “100 Rifles” with Jim Brown and Raquel Welch.

During the 1970’s 70mm & stereo sound was installed which only added to the great experience. Every major event film opened there and if you had a choice to see the same film there or at one of the bland, non stereo sound General Cinemas in Northwest Indiana, you usually took the drive to Calumet City.

“Airport 1975”, “Logan’s Run”, “King Kong”, “Star Wars”, “Close Encounters of the Third Kind” and “Superman” were all films my family chose to see there. Every experience was a great one. I can remember seeing “Aliens” there and the sound was so loud my ears rang after the movie. That was the first and only time that has ever happened.

The area is not as safe as it once was but I still took in a movie on rare occasions (both of the new “Star Wars” films, “Titanic”, and “Spiderman”) but the management seemed to care little about its appearance. The curtains remain open all the time. The side lights are never used and now the flood lights the cleaning crew uses are turned on before and after the movie. Unfortunately when the flood lights are turned on you cannot see the credits on the screen. The rocking chairs were removed in 1994.

This theater closed in January 2006 and demolition started in June 2018.