Places to see in ( Chicago – USA ) The Chicago Theatre 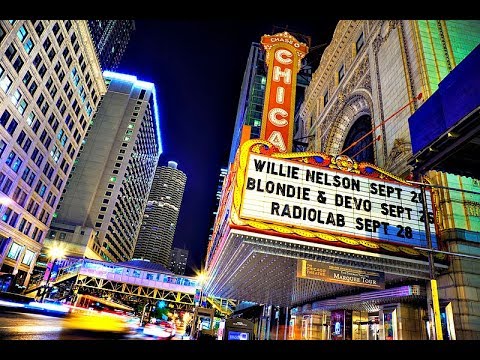 Places to see in ( Chicago – USA ) The Chicago Theatre

Along with the other B&K theaters, from 1925 to 1945 the Chicago Theatre was a dominant movie theater enterprise. Currently, Madison Square Garden, Inc. owns and operates the Chicago Theatre as a performing arts venue for stage plays, magic shows, comedy, speeches, and popular music concerts.

The building was added to the National Register of Historic Places June 6, 1979, and was listed as a Chicago Landmark January 28, 1983. The distinctive Chicago Theatre marquee, “an unofficial emblem of the city”, appears frequently in film, television, artwork, and photography.

The structure is seven stories tall and fills nearly one half of a city block. The 60-foot (18 m) wide by six-story tall triumphal arch motif of the State Street façade has been journalistically compared to the l’Arc de Triomphe in Paris. The central arch-headed window adapts the familiar motif of Borromini’s false-perspective window reveals of the top floor of Palazzo Barberini, Rome. The coat of arms of the Balaban and Katz chain—two horses holding ribbons of 35 mm film in their mouths outlined by a border of film reels—is set inside a circular Tiffany stained glass window inside the arch.

The theatre is also known for its grand Wurlitzer pipe organ. At the time it was installed it was known as “The Mighty Wurlitzer” and could imitate the instruments of an orchestra. Jesse Crawford, a noted Theatre Organ performer, is attributed as the person who “was responsible for the design and choice of sounds”. The organ came from Wurlitzer’s North Tonawanda Barrel Organ Factory in July 1921 with “four manuals and 26 ranks of pipes-Opus 434”. The American Theatre Organ Society restored the organ in 1970, which had expanded the organ from 26 to 29 ranks by that time. It is one of the oldest Mighty Wurlitzers still in existence.

( Chicago – USA ) is well know as a tourist destination because of the variety of places you can enjoy while you are visiting Chicago . Through a series of videos we will try to show you recommended places to visit in Chicago – USA