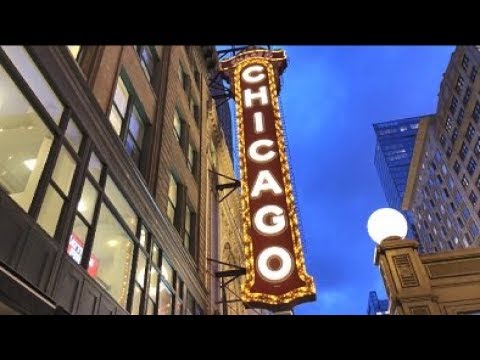 The building was added to the National Register of Historic Places June 6, 1979, and was listed as a Chicago Landmark January 28, 1983. The distinctive Chicago Theatre marquee, “an unofficial emblem of the city”, appears frequently in film, television, artwork, and photography.

The Y-shaped figure behind the horizontal word Chicago on the State Street marquee is the city’s “municipal device”, a badge which symbolizes the forked Chicago River at Wolf Point.

When it opened October 26, 1921, the 3,880 seat theater was promoted as the “Wonder Theatre of the World”. Capacity crowds packed the theater during its opening week for the First National Pictures feature The Sign on the Door starring Norma Talmadge.

During its first 40 years of operation, the Chicago Theatre presented premiere films and live entertainment. Throughout its existence, many of the top performers and stars of their day made live appearances at the theater. Ronald Reagan announced his engagement to Jane Wyman at the theater.

During the economic and social changes of the 1970s, business at the theatre slowed for owner Plitt Theatres, affecting ongoing viability.

The Chicago Theatre Preservation Group commenced renovation of the buildings which were completed in 1986 at a cost of million (.1 million), with .3 million (.6 million) spent on the Theatre. The theatre reopened September 10, 1986, with a performance by Frank Sinatra.

The interior shows French Baroque influence from the Second French Empire. The grand lobby, five stories high and surrounded by gallery promenades at the mezzanine and balcony levels, is influence by the Royal Chapel at Versailles. The grand staircase is patterned from the grand stair of the Paris Opera House and ascends to the various balcony levels. Marshall Field and Company supplied interior decorations including drapes and furniture. The crystal chandeliers and bronze light fixtures fitted with Steuben glass shades were designed and built by Victor Pearlman and Co.

In 2004, the original marquee was donated to the Smithsonian Institution. The marquee is featured in numerous movies and TV shows set in Chicago, and its neon font was used in the title of the 2002 film Chicago.

The theatre is also known for its grand Wurlitzer pipe organ. At the time it was installed it was known as “The Mighty Wurlitzer” and could imitate the instruments of an orchestra.Jesse Crawford, a noted Theatre Organ performer, is attributed as the person who “was responsible for the design and choice of sounds”. The organ came from Wurlitzer’s North Tonawanda Barrel Organ Factory in July 1921 with “four manuals and 26 ranks of pipes-Opus 434”. The American Theatre Organ Society restored the organ in 1970, which had expanded the organ from 26 to 29 ranks by that time. It is one of the oldest Mighty Wurlitzers still in existence.